Robert Loughlin was born in Alameda, California, on a Naval base. At an early age, Loughlin became interested in culture and spent many hours of his childhood listening to the family's FM radio. He left school after the sixth grade in order to take care of his brothers and sisters. During the late 1960s, Robert had already established a love for design and for being a free-thinker. He lived in a Geodesic Dome in Canyon, California, and was part of the Berkeley Riots.

In the 1970s, Robert opened two stores in San Francisco, California, specializing in American Industrial Design. During this period, Robert was a pioneer in Mid-Century Design and produced its first show in the United States. Robert was also co-owner of the first punk supply store in San Francisco, and became lead singer in his no- wave band The Decorators along with the artist Arch Connelly.

In 1980, Robert relocated to Miami Beach, Florida, and opened a design store. It was during this period that Robert began painting. In the early 80s, Robert moved to New York City and became part of the burgeoning art and social scene. Robert opened the Executive Gallery on E. 10th Street and Arch Connelly served as gallery director. Robert developed a reputation and became someone whom high society turned to in order to uniquely decorate a home with haute design. Clients of Robert included Andy Warhol, Jean-Michel Basquiat and Robert Mapplethorpe.

It was also during this time that Robert began showing his artwork and was noticed by the New York art world. His work is widespread throughout New York City. His signature icon, the squared-jaw man with a smoke called the "brute", has appeared all over the city on signs, doors and walls.

Robert would incorporate his grittiness into his art. He ransacked antique stores, thrift shops, flea markets, galleries and estate sales and emerged with treasures that he used as his canvas. Nothing was sacred: furniture, wood, metal, plastic, glass, textiles, vintage advertising boxes, even someone else’s paintings. Unfortunately, Robert left this world too soon when was struck and killed by a car near his home on Tuesday, September 27th 2011, in North Bergen, New Jersey. He was 62 years old.

Gary Carlson, Robert Loughlin's partner of 31 years, leads efforts in issuing catalog numbers for worthy works of Loughlin's art. Works are evaluated based on numerous proprietary criteria.  High-resolution images (300dpi or greater) are needed to begin the process, along with any further documentation or history you may have of the work(s).
With the recent demand for Loughlin's art, there have been unauthorized works circulating in the market. If you have a work you believe to be a genuine Loughlin and would like a catalog or unique-identifier number(s), contact Gary at 917-648-6950 or gary@robertloughlin.us to begin the process.

PAY FOR AUTHENTICATION WITH PAYPAL 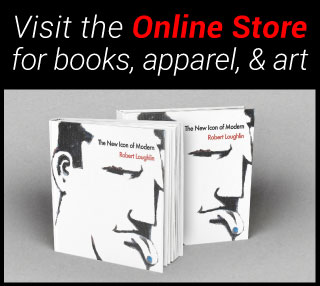 "There is a lot of intensity in Robert's paintings. This character that he has created is both unknown and knowable, and repeats in ways that become very sensitive. There is a history to what he is doing."  – Thomas O'Brien, Designer/President, Aero Studios, NYC